Does your writing need a little Yin and Yang? 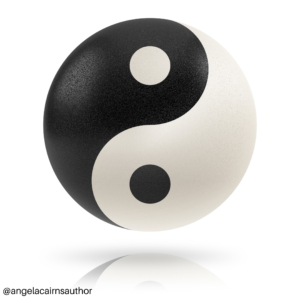 I love the notion of flow and change and so the concepts of Yin and Yang that I’ve encountered as acupuncturist and practitioner of T’ai Chi chime with me. I’ve found it useful to apply the principles in story and character development for writing too.

The symbol with its circular form is divided into two ‘coma’ shaped halves, one black, one white, each with a spot of the opposite colour within. The circle represents a balanced state within which Yin and Yang change and flow into each other. The spot of opposite colour in each half suggests that nothing is completely Yin or Yang and that within each, is the seed of the other. Yin is depicted as the dark or shady side, Yang as the white or sunny side of the diagram. As opposing sides, Yin /Yang can also be thought of as Female/Male, Passive/Active or Introvert/Extrovert

Plants are a good example of the Yin/Yang balance:  In Winter, a seed lays dormant in the ground (Yin), but within it is the potential for growth (the spot of Yang). As the season turns to Spring and into Summer, the seed germinates, and the plant grows to full maturity (Yang). It then produces seed and begins to decline in autumn (the spot of Yin within the Yang). The plant dies back the seed falls to the ground dormant (Yin) in Winter and the cycle begins again.

Of course, the harmony of Yin and Yang can be disrupted by outside forces and my purpose in a healthcare setting, is to use treatment to restore balance. It is also my purpose in storytelling. I create a dilemma for my main character then bring them through a series of challenges to a destination where the dilemma is resolved. I provide for them on their journey, help or hindrance and internal soul-searching to resolve their dilemma.

So how do I use Yin and Yang when I write?

I decide where my main character(s) is in their Yin/Yang cycle, at the start of the book; for example:

1/ My MC is in crisis (Yang). What is the external or internal event that has caused this? During their journey towards resolution, I consider how the character will embrace the crisis, who they meet to mentor them or on the contrary, who leads them astray. I also reflect on how they bring about any changes, so their crisis becomes meaningful (Yin).

2/ Perhaps instead, my character starts out in a rut (Yin), and something happens to make action imperative (Yang). Think Harry Potter and the Philosophers Stone. Harry is disempowered living with the Dursleys (Yin), but inside he rages against the injustice (seed of Yang). His letters from Hogwarts come despite all opposition, and he breaks free (Yang) but with his freedom comes the truth about his parents and the burden he now carries (seed of Yin).

3/ Relationships; Yin and Yang concepts can help create interesting relationships between characters. For example: In Fifty Shades of Grey, Christian initially appears to be an all Yang character, until we find out about his early life (The seed of Yin in him). Anna is his opposite, introverted and lacking confidence (Yin), but she refuses to be submissive, (her seed of Yang.) They move as a couple move through various trials and tribulations but ultimately arrive at a successful balance through compromise. Had there been no seeds of Yin in Christian or Yang in Anna, their possibility for change and redemption would not have existed.

4/ Duality; Within themselves, characters may flow from Yin to Yang and exhibit duality at different points in the novel. For example, In Captain Corelli’s Mandolin, Captain Corelli exhibits two sides, musician/soldier, enemy and lover of Pelagia, being an educated liberal man/ participating in flawed fascist idealism.

The MC may move through several Yang and Yin cycles during the book – imagine the conflict at the centre of the story being like a pebble thrown into a calm pond. The Yin and Yang of the plotline are the peaks and troughs of the ripples as our character makes their journey. Ripples which expand away from the centre until they die out and calm is restored again as the main character’s problems are resolved.  The ripples and troughs can be subplots or the challenges I create for my character through the book of just their changes of mood.

Elements of both Yin and Yang are important in a story. Any plot needs light and shade, action and reflection, and so must flow from Yin to Yang. But the concept can be applied as simply as thinking about writing with a variety of slow and fast passages or by using a variety of long and short sentences.

Pivotal moments in a book are often at the point of switch over between Yin and Yang elements of the plot and there is an infinitesimal pause. The writer can seize the tiny pauses, as one element flows into the other, to create a dramatic effect. This example is from Captain Corelli’s Mandolin

‘The two men looked at one another, the doctor tilting his chin at a proud angle, (Yang)and the Italian searching for a form of words that was both firm and mollifying. (Yin), (Pause) Suddenly the doctor’s expression changed, and he asked, “Did you say that you are a quartermaster?”

In this short scene, the balance of Yin to Yang shifts between the characters as the balance of power in the conversation shifts. There is also a dramatic pause and a mix of short and long sentences creating the dynamic.

I find Yin and Yang very helpful if I get blocked when writing. Looking for the seed of Yin in a Yang moment or visa-versa helps me to understand my characters motives or can give depth to a character who is seeming two dimensional. I look at the nature of the preceding passage and whether my story needs to flow from Yin to Yang which can help to move the story forward.

Finally, I use the concept in editing by marking up passages or characteristics as  Yin or Yang throughout the book. This helps me look at the balance of my story in a different way, to create a more rounded, balanced finished product.

I hope you have fun exploring the dark and sunny side of the mountain and maybe it will add a different dimension to your writing.

AN AUTHOR OF NOVELS AND SHORT STORIES